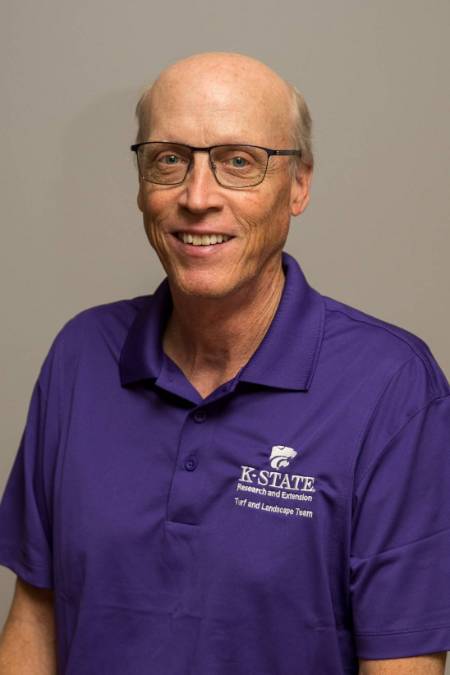 Dr. Jack Fry was raised in Overland Park, KS where he first gained interest in horticulture by working in the yard alongside his father. During his undergraduate studies at K-State, Fry decided turfgrass science was the option he wanted to pursue. Later on, he chose to further his knowledge in the same area at the graduate level and attended the University of Maryland (M.S.) and Colorado State University (Ph.D.).

Before returning to Kansas State University, Dr. Fry served as an Assistant Professor in the Department of Horticulture at Louisiana State University from 1987-1991. Beginning in 1991, Fry began his very successful career at K-State. His many accomplishments include serving as an advisor for numerous M.S. and Ph.D. candidates, authoring over 130 scientific publications, and co-authoring the textbook Applied Turfgrass Science and Physiology. In addition to his academic achievements, Dr. Fry holds a faculty member position with the Golf Course Superintendent’s Association of America (GCSAA), presents a seminar at their annual Golf Industry Show and writes a column for Golf Course Management magazine.

Fry is currently serving a 60% research and 40% extension position (details below).

In his free time, Dr. Fry enjoys cheering on the Wildcats at KSU sporting events, spending time with his children, working in the yard, playing golf, bike riding and fishing.

Dr. Fry's research is focused on reducing inputs for turfgrass, including water, fertilizer, and pesticides. In this effort, he has focused his research over the past 20 years on zoysiagrass, a turfgrass that requires fewer inputs.

Fry has worked in conjunction with researchers at Texas A&M AgriLife-Dallas to develop two new zoysiagrass cultivars, Chisholm and Innovation. These grasses are drought resistant, cold hardy, and require minimal inputs to maintain quality. They are best suited for use in the transition zone of the United States - the area in the middle of the country where growing good turf is difficult. The United States Golf Association has recently sponsored this research and Purdue University has joined the research group on zoysiagrass cultivar development; new cultivars are soon to be released.